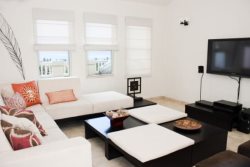 Old San Juan is a 500 year-old neighborhood originally conceived as a military stronghold. It is the oldest settlement within Puerto Rico and it is the historic colonial section of San Juan, Puerto Rico. The original city founded in 1521, contains carefully preserved examples of 16th- and 17th-century Spanish colonial architecture. Old San Juan is the heart and soul of the Island. Puerto Rico its a melting pot of Spanish, Afro-Caribbean, Tano and Anglo influences that converge in the history, architecture, galleries, music and the gastronomy of a 16th Century Old San Juan... If you are interested in history, enjoy a walk on the ramparts, where half a millennium ago Spanish soldiers held their watch. Begin your journey with three stunning Spanish Colonial Fortresses: El Morro, Fuerte San Cristbal and La Fortaleza, designated as World Heritage Sites by UNESCO. El Morro, was designed to protect the city from attacks by sea; San Cristbal guarded from approaches by land. This last one covers 27 acres, and it is the largest fort built by the Spanish in the New World. Dont miss the opportunity to have a splendid picture from La Garita del Diablo (Devils Sentry Box), which is one of the oldest parts of Castillo San Cristbal. (It was built around 1634). Old San Juan, the magnificent walled city, its rounded with magical architecture, churches and chapels, fountains, statues Pretty and comfortable plazas that invites you to stay all over again hundreds of time just to relax and enjoy pictorial people that adorned streets with their typical town chores. ATTRACTIONS: Casa Blanca Museum Cristo Chapel National Gallery La Fortaleza (Governors House) San Felipe del Morro Fort (El Morro) & San Cristobal Fort.