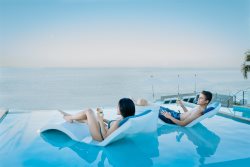 Las Fiestas de la Calle San Sebastian also known as San Se, is a very popular Puerto Rican festivity that takes place in the Old San Juan. It is a four-day event that starts the third Thursday of January through Sunday. This festive is in honor of Saint Sebastian. January 20th is the day that Catholic Church celebrates the life of this Saint. More than 200,000 people participate in this festival, making this activity be recognized internationally. n the present, the addition of artisans has acquired more importance, as well as music and dance in the nights. Also, artists perform at different stages localized around the Old San Juan. Cabezudos now include characters representing the Puerto Rican folklore that pass through the streets dancing and singing followed by the public. Now, the parade is longer than the past ones and the municipality of San Juan is responsible in organizing the entire festival.