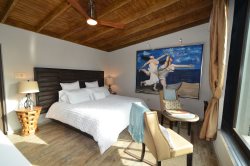 In Puerto Rico there are some 2,000 caves, of which about 415 have been explored. The best known system of caves in Puerto Rico is the Cavernas del Ro Camuy between the municipalities of Lares, Camuy, and Hatillo. One part of the system has been developed as a tourist attraction known as the Parque de las Cavernas del Ro Camuy (Camuy River Caverns Park). According to speleologists, the Ro Camuy system, when it is at its peak, may be one of the most voluminous underground rivers in the world. Another of the most important systems is the Cuevas del Ro Encantado, which is found between the municipalities of Florida, Ciales, and Manat.. It has one of the longest submerged passages through which human beings can pass. Two other important cave systems in the northern area are Cueva Sorbetos and Cueva Mata de Pltano, both in Arecibo. Cueva Sorbetos is thought to be the most beautiful in Puerto Rico given the type of formations (speleothemas) in the shape of straws. Cueva Mata de Pltano, on the other hand, is characterized by the large number of bats that roost there and the constant presence of the Puerto Rican boa (Epicrates inornatus). The Aguas Buenas system of caves extends for one kilometer and is made up of principal galleries of approximately that length. The Ro Cagitas, a tributary of the Ro Grande of Loza, has its origin here. Inside it are pre-Taino and Taino wall paintings. It is thought to be a refuge for wildlife, as 52 species have been identified, of which 50 percent are endemic.